Rusty Beckel truly loves and appreciates the game of golf, so much so that she volunteers for at least two major golf associations–in two different states! She serves as the treasurer of the Women’s Southern Nevada Golf Association and as the president of the Oregon Golf Association, roles she takes very seriously. In between those important jobs, she finds the time to be an active player in tournaments and to play in several club events. –By Brian Hurlburt, Las Vegas Golf Insider. 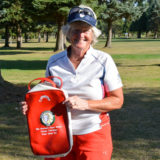 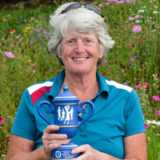 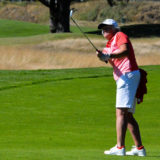 “We hear the United States Golf Association say all the time that they couldn’t do what they do without volunteers and that this statement is so very accurate,” Beckel says. “The sustainability of the game is truly augmented by volunteers. That’s true whether we are talking about just a local ‘club’ or whether we are talking about state organizations. State organizations have evolved far from their origins of running a couple of state championships. These organizations now collectively work together with their peers to manage an industry that adds so much value to their respective communities.  This industry, when measured collectively on a state-by-state basis, measures in the billions of dollars in influencing income for jobs, travel and lodging, food and beverage, entertainment, equipment, sustainable green-space management and charities. That said, state association funds only stretch so far when managing the operations of conducting competitions, rating courses, education (rules/handicapping), promoting, advocating and fundraising. Volunteers at all levels fill the gaps and give individuals who love the game an opportunity to make a difference.”

In Las Vegas, Beckel plays out of Chimera Golf Club, but loves to be a part of many different clubs. She is or was a member of Boulder City, Las VegasPaiute ladies, Southern Nevada Business Women Golf Association, Wildhorse and others. She also has a second home at the WSNGA.

“The first thing that comes to my mind is that the WSNGA is a ‘best practice’ in Women’s golf,” says Beckel. “The organization that promotes and fosters fun and competitive golf for women in Southern Nevada is highly successful in engaging women in the game. I have not seen any other women’s group as successful.”

Beckel served in the banking industry for many years, including as part of a start-up, before retiring and turning to the fairways for competition, fun, camaraderie and a place to make a difference.

“I played casual golf for a number of years with a group from my work until the company was sold and then in 2001 I was talked into joining a ladies club at a public golf course near my home in Oregon,” Beckel says. “I was pretty sure I wasn’t good enough to be in a ladies group. What a mistaken impression that was! I quickly learned that there were low handicap players, but that there were many more in my 20+handicap range and the ladies club was welcoming to ALL.  Being in a ‘club’ gave me the opportunity to meet players and create goals for improvement. I met my best friend, Karen, and together we embarked on lessons, finding fun tournaments to play and improving our game. Since then my handicap has been between 7 and 10 over the last few years.

“I have so many great experiences since starting to play.  My golf travels includes Mexico, many of our 50 states, Thailand and Canada. I’ve experienced meeting so many wonderful people playing organized golf or even just going out ‘single’. I’ve won a few club championships and local events, but I’ve also come away ‘dead last’ and I learned something every time. A huge highlight was our 2018 Silver Cup win over Northern Nevada when I was Co-Captain.”

Another unique experience was when a n executive at a former company needed someone to attend an event because he was unavailable. It turned out to be an indelible memory.

“My boss called and said he wanted me to travel to ‘fill in for him’ at an event he couldn’t make,” Beckel remembers. “I thought it was a conference, but it turned out to be the Arnold Palmer Invitational Pro-Am. What a fabulous experience that was. Playing alongside Tom Pernice Jr., meeting Arnold Palmer, and attending the festivities was a once in a lifetime experience for me.  Being the only female that year in the Pro-Am got me a bit of a following. After making birdie on a par 3, I even had someone ask me for my autograph … it was too funny.”

Beckel loves to play the sport she loves, but it also has a much deeper meaning than recreational leisure.

“I am such a believer in the value of golf as a sport and activity for women of all ages and abilities from junior golf to women in their 80s,” Beckel says. “I support the game at all levels. It’s never too late to start.”

“I respect so many people in the game. I have to say that the woman player that influenced me the most during the first part of my journey was Nancy Lopez. Nancy energized the LPGA event played in Portland for many years and was a favorite at the U.S. Women’s Open played there as well. And over the years watching her continue to contribute to growing the game and using the game to fund-raise for such meaningful causes makes her one of my favorites. I did have a chance to meet her once and she was gracious and humble. But there are so many others I have met along the way it is impossible to pick just one. Like a young diabetic girl in a match that I was rules officiating when she was a ‘pee-wee’ junior golfer. She later went on to win the U.S. Women’s Four-Ball with her playing partner and had an accomplished collegiate career. Her positive attitude and perseverance is off the charts.”