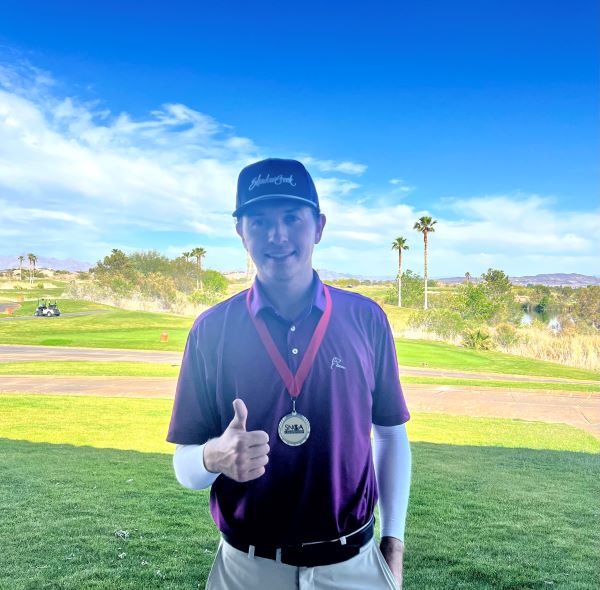 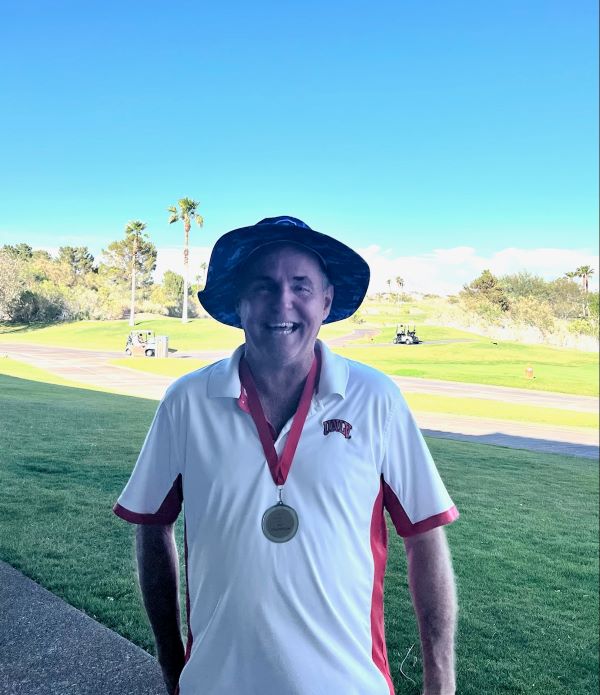 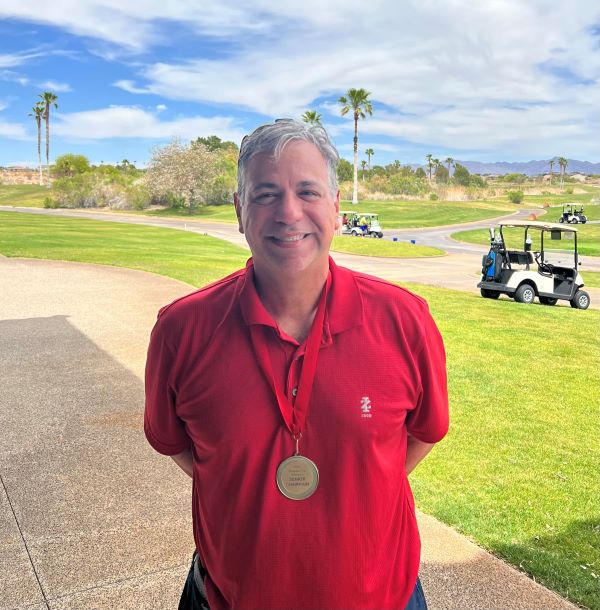 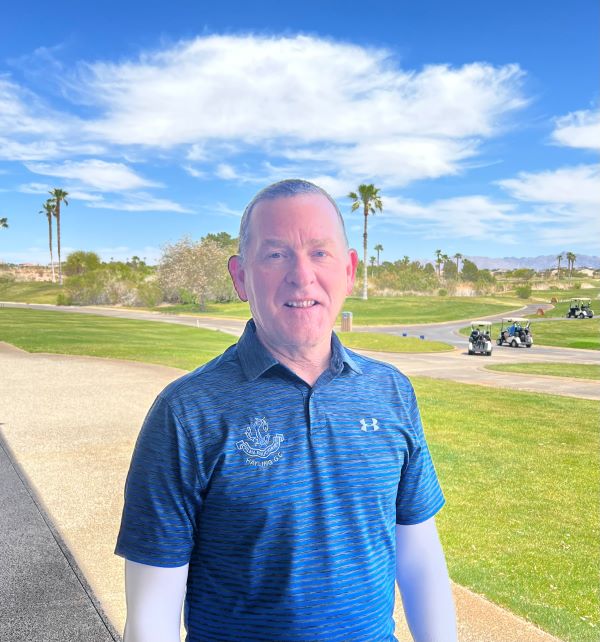 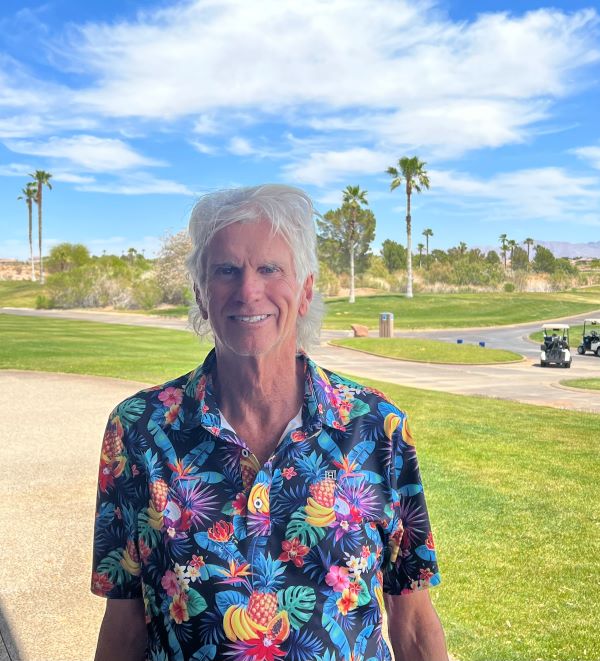 Matt Mitchell, playing in just his eighth SNGA event, found his way into the winner’s circle.

He and Jackson Parrish finished tied at six-under-par for the two days setting up a playoff. Mitchell won with a par on the second playoff hole.

“These tournaments have been a lot of fun,” he said. “They are very competitive and it’s nice to get a win.”

Mitchell, who is a student at UNLV, played on the Rebels’ baseball team for three years.

Now, he’s finishing up school and playing a lot of golf.

“I just want to see how good I can get,” he said. “I hope to keep moving up in the amateur tournaments.”

Mitchell knew the final round would be quite the challenge.

“Jackson and I played in a U.S. Open qualifier a couple of weeks ago and I knew he would be tough to beat when he got hot,” Mitchell said. “He was coming for me on the back nine. He chipped in, made some long putts and was just hot. I was happy enough just to get into a tie and get into the playoff.”

Parrish birdied four of the final five holes in the second round and Mitchell birdied four of his final seven holes as both players shot a four-under-par 32 on the back nine setting up the playoff.

It ended when Mitchell parred the par-5 second hole.

“Jackson got in a little trouble off the tee and it wound up I only needed a par,” Mitchell said.

“I’m super-excited to win and to get into these tournaments this summer,” he said. “I really feel like I can compete.”

Brian Marks won his first SNGA title in five years, putting up two net eagles on the scorecard in the final round, in winning the Net title by three strokes.

Marks added three net birdies and a natural birdie to help out his final-round 68.

“It’s been a long time since I won anything,” Marks said. “It really feels good.

He said his work around the greens helped him to the title.

“My chipping and putting were really, really good both days,” Marks said. “I only hit four fairways today so I was scrambling a lot. I worked my way around the golf course both days.”

He added he had a chat with his brother in Buffalo that helped him stay focused.

“He said I just need to stay in the moment,” Marks said. “If you screw up, just put it aside and keep going and I did that. I didn’t let any bad shots affect me.”

James Corey parred his final eight holes in picking up his third SNGA title and first since 2020.

Corey had three birdies in a five-hole stretch as he posted a one-under-par final round and rallied for the victory.

“It’s a great feeling to win again,” Corey said. “I was hitting the ball straight and putting really well.”

He added the putting wound up being crucial.

“I made a lot of comeback putts from five feet and didn’t have any three putts,” he said.

And having a couple of tap-in birdie putts early didn’t hurt his final round.

“I got everything kickstarted with a couple of iron shots that wound up about a foot of the hole for easy birdies,” he said. “Those were nice and really gave my confidence a boost.”

He said his game has been solid…up to a point.

“I’ve been playing pretty consistent golf but I just haven’t been finishing well,” he said. “The week I worked on finishing strong.”

Overall, he said he had a goal in mind coming down the stretch.

“I didn’t want to make any mistakes,” he said. “I wanted to make any other players have to come and beat me.”

Greg Frey played his final six holes in six under par with two net eagles, a net birdie, a natural birdie and two pars in winning his first SNGA title in well, it’s been awhile.

“It’s been a long time since I’ve won…probably decades,” Frey said with a laugh.

But there were some problems along the way he had to overcome.

“I made two bad swings today and it cost me a triple and a double,” he said. “But I played well the rest of the way so it was nice to bring it back at the end. But that’s the way Boulder Creek is. Make a bad swing and it can certainly lead to trouble.”

He said the early woes could have derailed him but he kept focused.

“I had a triple on No. 2 and then bogeyed No. 3 so I was four over right away,” he said. “I kind of limped through the rest of the front nine until I got to No. 9. I hit two great shots on No. 9 and made birdie and that got me going.”

He also birdied No. 10 (a net eagle) but still had one more stumble to overcome.

“I made double on 11,” he said. “But I didn’t let it get to me. From there on I played real good golf the rest of the way in. It was certainly a great way to end the tournament.”

It was Carpendale’s second win of 2022 as he also won the Nye County Amateur in early April.

“I struggled for sure,” Carpendale said. “I wound up doing just enough right to win.”

He said it was definitely a roller coaster two days.

“I would be playing good golf and then go three or four holes where I couldn’t figure anything out,” he said. “I would play one good hole, then one bad hole. I would have one good swing, then one bad swing. It was a grind.”

And he was quick to add that grinding can take its toll.

“Grinding wears you out,” he said. “You just want an easy couple of holes somewhere…one where you’re 20 feet away and lag up a putt, tap it in and then go sit in the cart and relax.”

That didn’t happen often for Carpendale.

“I hit four lob wedges on the back nine and didn’t hit the green with any of them,” he said. “I was just so inconsistent. But in the end, it all worked out.”

Jeffrey English birdied the final hole to post an even-par final round and a two-stroke victory in the Silver Net Division.

It was English’s third win of 2022 but his first net win after back-to-back gross titles in mid-March.

“I played very steady and just played my game,” he said. “That’s all I can do.”

He said putting helped him seal the deal.

“I made a couple of par-saving putts that were key,” he said.

Overall, it was business as usual for English.

“I was in the fairway and hit a lot of greens,” he said. “I did what I needed to do. And the birdie on the last hole certainly helped.”

He said he was shocked to win the net title.

“I never think about the net,” he said. “I only had one stroke over the two days, none at Boulder City and one today at Boulder Creek so that makes it a little tough to win the net. It usually goes to someone with a higher handicap who has a good two days. I was really surprised.”