Here’s the scenario: You’re a female golfer living in the Sun City Summerlin community and play golf, but haven’t been able to find a group to tee it up with and just have fun. Sound familiar? Well, your wait is over. The Sun City Summerlin Women’s Golf League can certainly fill the bill. –by Bill Bowman, Las Vegas Golf Insider staff.

The association, which came into existence in the late 1980s, has just over 100 golfers with handicaps ranging from 11 to 40. The group returned to action in early May following Nevada Governor Steve Sisolak’s decree to allow golf courses to reopen.

And the league’s main goal is making sure everyone feels welcome when they join. Being the newcomer in a group can often feel daunting. Not here.

“We have a buddy system,” says Patty Gerber, president of the Sun City Summerlin Women’s Golf League. “When players join, we put them with a buddy who is a member to show them the ropes and introduce them around.”

Gerber added there’s an extra incentive for new players to check it out. Players can play twice without paying dues.

“We are a pretty fun group,” Gerber says. “Everybody has a good time. A lot of people stay and have lunch and cocktails after golf. For most people it’s a great chance to play golf and then socialize.”

Gerber is excited about the fact the group also has two sets of forward tees, one of them cutting about 1,000 yards off the length. This enables everyone to be competitive and have fun no matter their ability or age. On the course, the group has 24 different formats listed on the website that they choose from for their weekly outing.

There’s every kind of format players can want.

From a best-ball to a scramble to a Ryder Cup format, the popular games are covered.

Add in a few side-action options like number of putts, chip-ins, holes-in-one, etc., and you’ve added more excitement to the fun and games.

“It’s a great way for new people in the community to make friends,” she says. “We try to get everybody involved. After all, we’re out here to enjoy a game we love.” 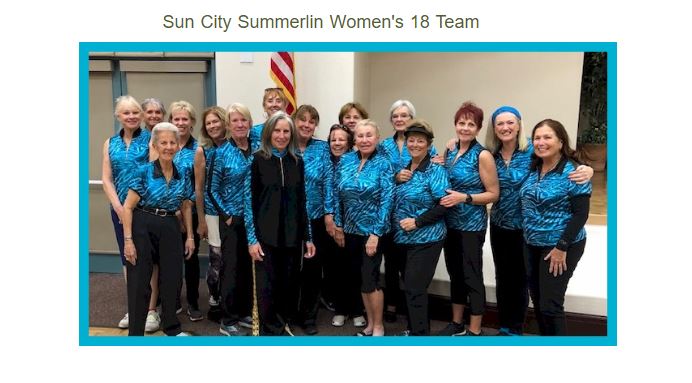