Janis Lunde, president of the Los Prados Women’s Golf Association, is a Jill of all trades. Lunde is in her second and final year as the group’s president. She’s not only making life on the golf course smoother for the women’s group, she’s also helping make the transition to future presidents smooth. — by Bill Bowman, Las Vegas Golf Insider staff.

But back to the Jill of all trades aspect. Lunde, while serving as the association’s president, is also on the Los Prados Golf Association’s board of directors. Add in the fact she’s a course rater and has also been involved as a rules official and her plate is full. It’s no wonder her golf outings are usually limited to the women’s group on Wednesdays.

“It’s a wonderful group of ladies to work with,” Lunde said. “They are open to new ideas and we have some really good stuff planned once this covid goes away.” 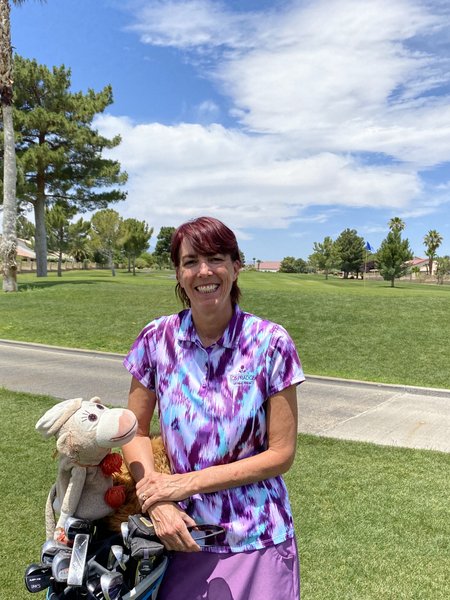 “When you take over a job, a lot of times it doesn’t come with a training manual,” she said. “We’re trying to make it easier for the next board by writing down guidelines. Things like how to run a tournament, how to work with the handicaps, how to run the weekly games. Just things that we take for granted but will now be in writing for future groups to have as a starting point.”

She said when she took over the presidency she definitely was in uncharted territory.

“We have about 75 women in the group,” she said. “And with the overall golf course, you’ve got to have give and take. We work with our pro (Bryan Mamon, director of golf) really well. If we want to have a tournament, we do a lot of talking and adjust a few things. He may want us to come out 15 minutes earlier to help with his tee times. We try to make sure everyone’s happy.”

While being president as well as playing are high on her priorities list, she’s also made room for the course rating aspect of her life.

“My friend Jan Hansen asked me if I would be interested in checking it out,” said Lunde who has been rating courses for about four years. “I’m a geek when it comes to spreadsheets and numbers so I went out with her and I loved it.”

Overall it’s been a quick two years as president for Lunde.

“It’s been amazing,” she said. “Of course this year, with that whole covid thing, it’s been a challenge. But we’re managing to get through it.”

“We’ve had Zoom meetings with the board,” she said. “It’s kind of funny being in an older community where people aren’t quite as tech savvy. Some people I couldn’t see and some I couldn’t hear. It was kind of cute. But they’ve all gotten a lot better and now things run smoothly.”

And if you’re thinking the name Lunde sounds familiar to you when talking about golf, Janis has been asked the same question often: Are you related to Bill Lunde? She’s quick to point out she isn’t related to the former UNLV and PGA Tour player…as far as she knows.