Jackson Parrish had two eagles over a four-hole stretch (including a hole-out from 113 yards) en route to his second straight SNGA win.

Parrish, who is joining the Cal Poly golf program this fall after entering the transfer portal earlier this year, said the eagles definitely sparked him.

“It was weird,” Parrish said. “I wasn’t making a ton of birdies but made plenty of eagles (three over the two days). I took advantage of some good shots, especially into the par 5s.”

He said he almost had no shot at the victory.

“The first day I almost missed my tee time,” he said. “My alarm didn’t go off and I live quite a way from the course. Today I made sure I wasn’t going to miss my tee time. I had a good warmup and just sort of went out there and grinded away.”

He admitted the early holes were a struggle in the final round.

“I didn’t have a great start today,” he said. “But I played the last 10 holes seven-under so I finished strong.”

Despite the back-to-back victories, he still sees room for improvement.

“I definitely need to work on my bunker play,” he said. “It’s been inconsistent at best. And that’s funny because my short game has been really good…except for the bunker play.”

He also has one more part of his game he wants to focus on.

“I want to improve my course management,” he said. “I only made two bogeys in this tournament and that’s good out here. I just want to make sure to avoid making any huge mistakes. That can happen quickly at a course like this.” 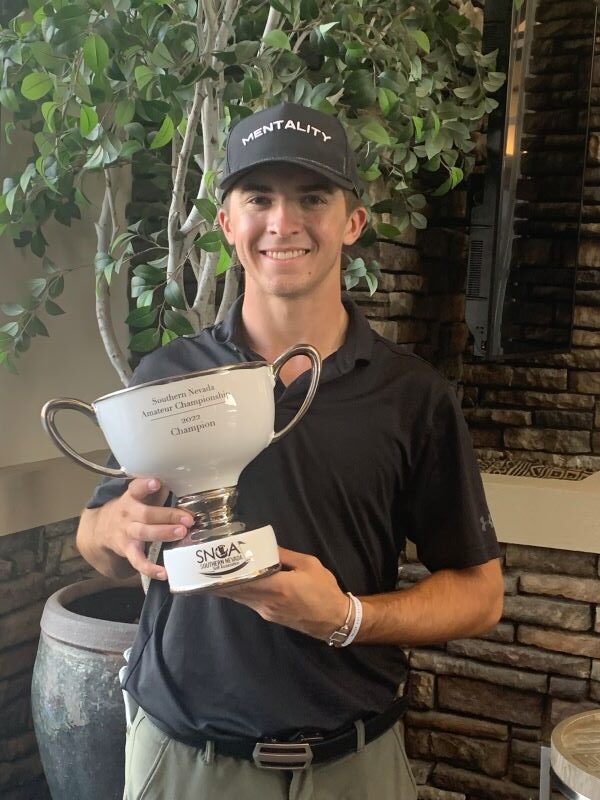 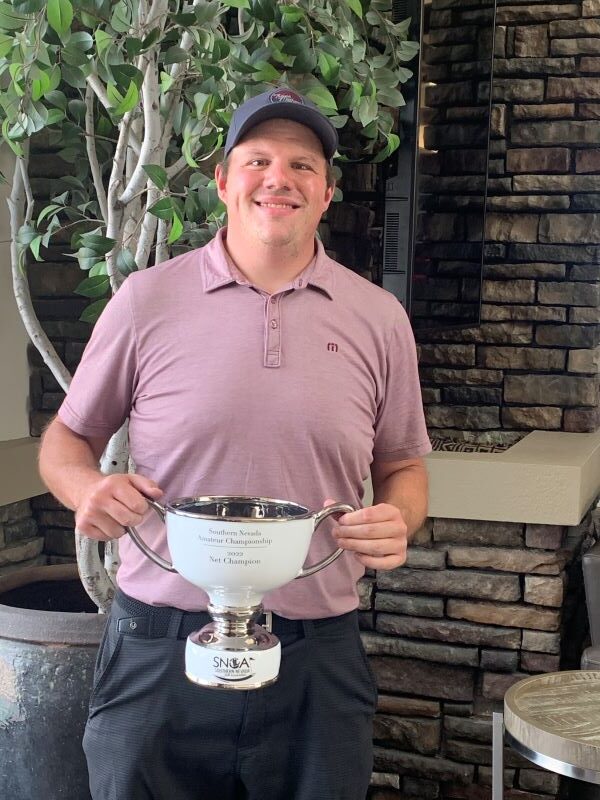 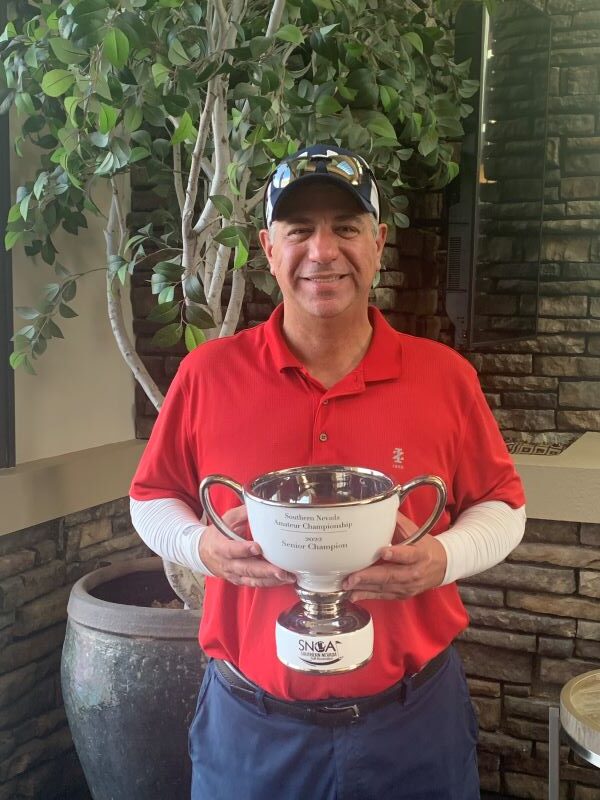 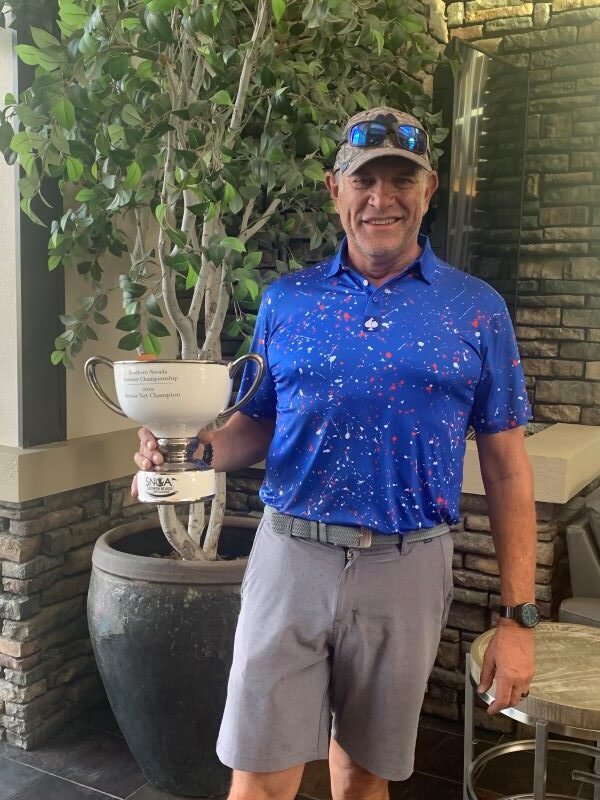 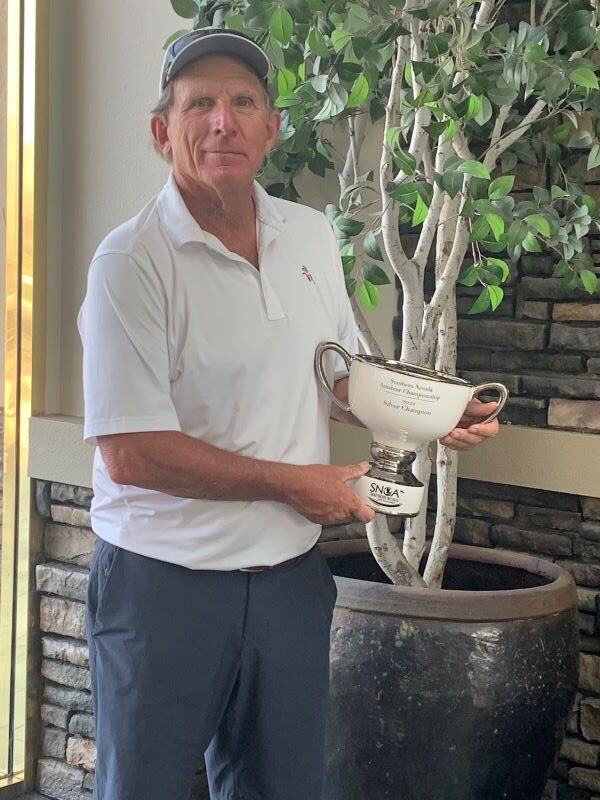 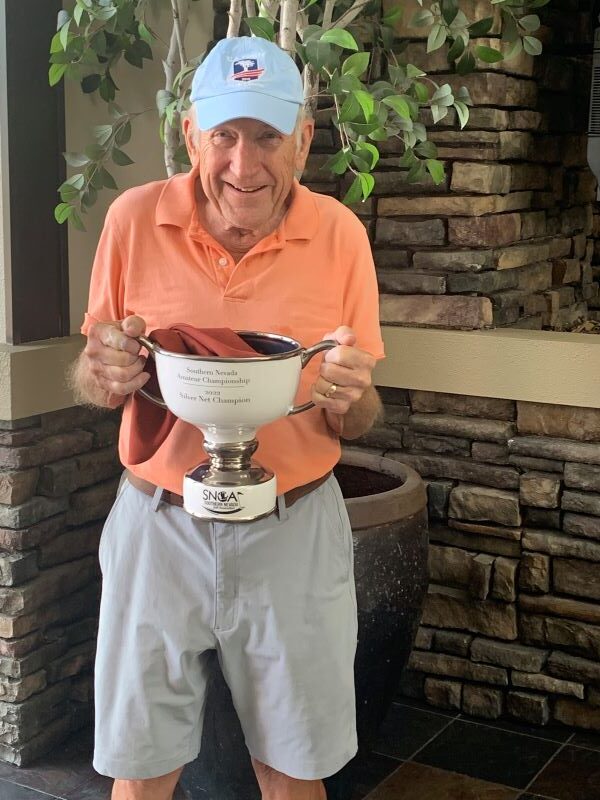 For Matthew Affleck, the number ‘7’ was indeed lucky.

On Sunday, Affleck played a seven-hole stretch in seven-under par (two natural birdies, three net birdies, a net eagle and a par) in racing to a five-shot victory in the Net Division.

It was Affleck’s first SNGA win. It is his first year playing SNGA events.

To add to the ‘7’ theme, Affleck was seven shots off the lead starting the final round.

He said he didn’t see the hot streak coming.

He added it was his best nine-hole score.

“It’s the first time I’ve shot an under-par nine,” he said. “My goal is to play a lot and get my handicap down. I want to play the championship division and compete.”

He said rounds like this will certainly help that goal.

“I played pretty well on the front nine,” he said. “I had one wayward iron shot and one in the water on a par-3 but otherwise I was really solid. On the back nine I just didn’t miss a shot. I hit the middle of a lot of greens and made some putts. It was just a great nine holes.”

James Corey shook off a slow start in the second round and won the Senior Division title, his second SNGA title of 2022.

Corey was four-over-par through his first six holes but played the back nine in two-under-par to secure the victory.

“I definitely started off a little rough and just made some bad shots,” Corey said. “But the last 12 holes I played well. My goal was to finish the last four holes really strong and I did that.”

He said he has one  main factor he wants to work on.

“My longer iron game needs a little work,” he said. “I’ve been driving and putting real well this whole year but my long irons…I really need to take them to the next level. They probably cost me a bogey or two.”

He said the victories have shown his change in work habits is paying off.

“I’m now doing what I wasn’t the last couple of years…finishing strong,” he said. “The extra workouts, extra putting and chipping in the mornings is helping me finish strong.”

And now he has his sights set even higher.

“Playing like this really helps my confidence,” he said. “And especially going into the state am. I haven’t played against the younger generation and I’m excited to play and have a lot of confidence going into the tournament.”

Kalmanson had two net eagles–one each day–and played the final five holes even-par on Sunday for the victory.

“(Saturday) was nice and consistent,” Kalmanson said. “Today I could not get my swing down for the first eight holes. Starting on No. 9 everything started clicking. I lipped out an eagle putt but a tap-in birdie is always good.”

He added his confidence is growing by leaps and bounds.

“The back-to-back wins are nice and that’s three wins this year,” he said.

He also won this tournament two years ago.

“The trophy is going to look very good next to the one from two years ago,” he said with a laugh.

He said the two net eagles were great, but he’s also lamenting the fact one of them could have been better.

“I should have had a net albatross,” he said. “I hit a good drive and my second shot cleared the bunker by the green. We couldn’t see the ball but when we got up there, I asked whose ball that was about six-feet from the hole. They said it was mine. I missed the eagle which would have been a net albatross.”

He said his game-plan for tournaments has proven to be a success.

“I’m keeping the ball in play and recovering from mistakes,” he said. “That’s working out well.”

Cyrus Whitney played it slow and steady–four birdies and four bogeys over the two days–and that turned out to be a winning formula as he picked up his second SNGA title of 2022.

He added his four-birdie, four-bogey two days was a solid result.

“The golf course was in outstanding condition,” he said. “The setup was a little difficult and there was a little wind and the greens were pretty firm. It made for a good challenge.”

He said there was one part of his game he was disappointed in.

He said once he got in the lead he tried to keep his cool.

“I just tried to stay steady,” he said. “I knew I was in pretty good shape. I still tried to play pretty aggressive but I knew places on the course where I just could not hit it.”

Loren Little won for the first time in 2022, capitalizing on four birdies over a six-hole stretch the second day.

It was the fifth straight year Little has won a title. He won twice in 2018 and once the last three seasons and is again in the winner’s circle.

“If you’re going to be at the start of the year buffet (the season-opening Tournament of Champions), you’ve got to win somewhere,” he said. “This happened to be my day.”

But he said it didn’t start out that way.

“It surprised me to win,” he said. “The first nine was so frustrating but I told myself to hang in there. I kept plugging along and my game came around.”

He said his first nine struggles did bring back some bad memories.

“At the first major I was ahead after the first day,” he said of the SNGA Amateur. “But by the end of the second day I was in last place. It wasn’t good.”

He said this one is special.

He said despite the first-nine struggles, he kept battling.

“The main thing that keeps me in the game is my short game,” he said. “I don’t drive it that far but I keep it in the fairway and if I can hit it close, I can make some putts.”