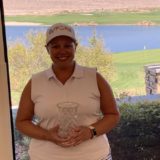 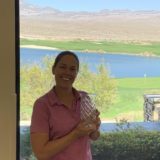 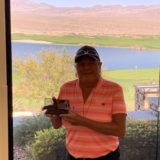 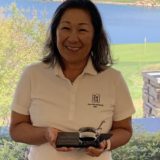 Kim Braaten had roller coaster rounds in winning the Amateur division. She had three birdies and three bogeys the first day and followed that up with a two-birdie, two-bogey second round. She posted a two-stroke victory.

Although she was happy with the win, she added her overall play wasn’t as solid as it should have been.

“My ball-striking wasn’t very good,” she said. “But I was happy with my putting. The putting definitely kept me in it. I didn’t have any three-putts which is good.”

The title was her second in this event as she also won in the mid-2000s. She was runnerup in 2019. Braaten also played golf at Colorado State in the early 2000s.

“This was a little bit of redemption,” she said. “I felt like I had it last year and wound up second. It was nice to win it again.”

She added her goal was to play a solid two days.

“It’s a narrow golf course in our landing areas,” she said. “You have to play smart and I got myself around the course pretty well.”

Overall, she said the victory in a tournament is always a positive outcome.

“You’re always your toughest critic,” she said. “I certainly could have played better, but any win is a win. It’s nice to have that feeling of tournament pressure. The more times you feel it, the more comfortable you are in those situations.”

Christina Brandt used a pair of net eagles on the second day, including one on the opening hole, to coast to the Net victory.

Forgive Brandt if she’s not familiar with winning a net title.

“I’ve never won a net tournament in my life,” she said with a laugh.

She added she’s been out of tournament action for awhile.

“I haven’t played much golf,” she said. “I definitely overachieved. I played better golf the last two days than I have over the last year. I didn’t drive the ball that well but I sunk a few putts and that helped a lot.”

She said it was just nice to get back out with friends.

“I’m sure we’re all in agreement that Covid sucks,” she said. “Everyone’s tired of being cooped up and it was nice to get out and be around friends.”

Overall, the two days were a change in her approach on the course.

“The truth is I’ve been playing the men’s tees a lot,” she said. “So when we move up, it’s an easier game. I can hit irons off a lot of the tees and keep it in play. It helps me a lot.”

Regina Quintero played two different rounds of golf but still ended up with a 72 each day and the Senior Amateur title.

“It’s kind of strange to have the same score each day but play completely different rounds,” said Quintero who is now a three-time Senior Am champ. “(Wednesday) I hit more fairways and greens and (Thursday) I had to scramble a lot more. But it’s nice to know you can scramble when you need to.”

She said the second day didn’t start out well, but she persevered. “You never know what the day is going to be like,” she said. “I bogeyed No. 1 from the sand but things got a lot better after that.”

She added that like most players, she’s much more comfortable not having to scramble.

“I would rather be able to to be on cruise control,” she said. “Just to hit fairways and greens and then sometimes those birdie putts will fall. It’s a lot more comfortable than having to scramble.”

Yoshie Masuda hung on for a one-stroke victory in the Senior Amateur Net.

Despite having five net birdies during her second round, it was the 16th hole that stuck in Masuda’s mind.

“That hole got me,” she said. “My drive was in the sand trap and I just had to punch it out. My third shot was OK but then I had 94 yards out. I hit my 100-yard club instead of my 90-yard club and went over the green. I wound up with an eight on the hole so that wasn’t good. But that’s golf, right?”

But, there were plenty of bright spots. The first day she had a pair of net eagles to give her a three-shot lead heading into the second day.

“I played so well,” she said of the first round. “I didn’t have any three putts and just kept telling myself to focus. I only had 26 putts the first day so I was very happy.”