Brady Exber (Senior) and Gary Carpendale (Silver) won gross titles in the 2022 Clark County Senior Amateur. Dennis Young (Seniort) and Jimmy Bradley (Silver) were the net champs in the tournament held Nov. 17-18, 2022, at Boulder Creek Golf Club. It was the SNGA’s fourth and final major of the year. –By Bill Bowman, www.LasVegasGolfInsider.com

That music in the background may seem familiar. It’s the theme from ‘Jaws’ and that shark that’s circling is Brady Exber who is back in the winner’s circle. The former 9-time SNGA Player of the Year is back in form. Recently, the SNGA decided to name the SNGA Championship Division Trophy in his honor. 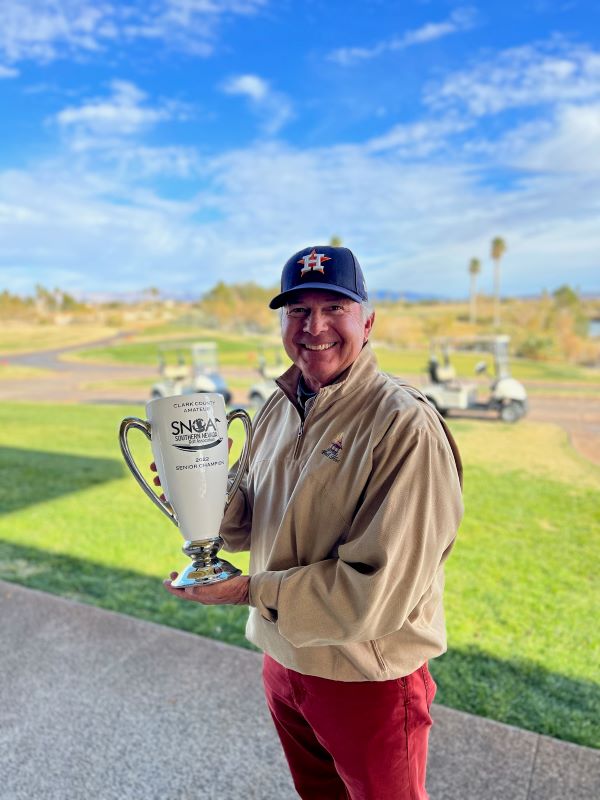 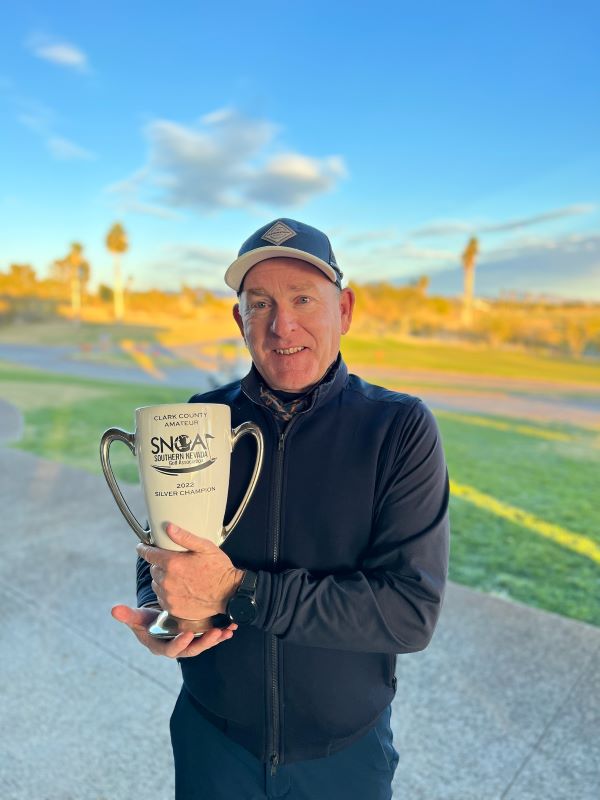 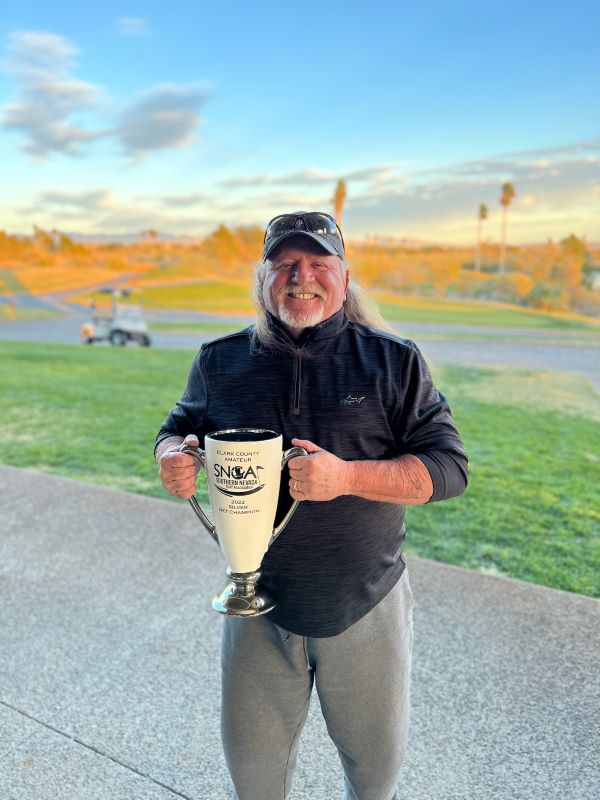 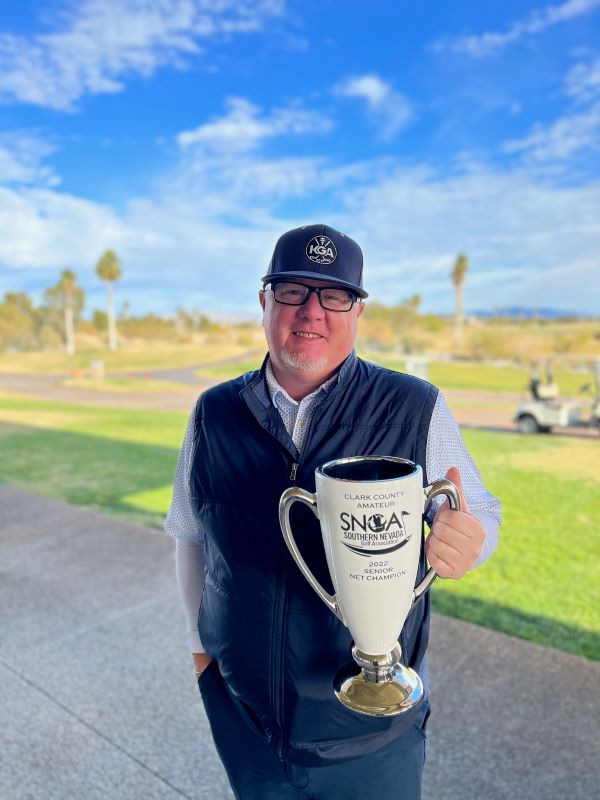 Exber won the Senior title in a one-hole playoff, his first individual crown since June of 2020. He does have a pair of team titles in that timeframe.

Exber has been out of action for the past year-plus as he has dealt with family health problems. With those getting under control, it is allowing him to find his way back onto the golf course.

Exber, who has lost count of his SNGA titles, does remember that he won his first SNGA title in 1986. In all, he has won more than 100 amateur tournaments.

He said his play over the two days surprised him.

“The toughest part was finding a swing that I don’t have to manipulate,” he said. “The fundamentals aren’t very good right now but I got away with it this weekend.”

He added he was shocked with one aspect of his game.

He said his final round was solid…up until the 13th hole.

“I was six-under through 12 holes with a bogey,” he said. “Then I three-putted from close range on 13 and that kind of woke me up. After that, I just didn’t give myself good opportunities coming in.”

“I’m super-happy,” Exber said. “Playing in the team event with Todd Roberts takes a lot of the pressure off. He’s been playing so great and having him as a partner makes things a lot easier. Coming to the individual event was different. I’m not going to lie…its very satisfying to play well over the last couple of days.”

Dennis Young was three-under-par over his final four holes and rallied to win the Senior Net title in a scorecard playoff.

It was Young’s first SNGA title since 2019 and second overall.

Young isn’t a regular in SNGA events but said he’s happy to tee it up in Vegas.

“I live in northern Nevada and come down here to play in SNGA events in the winter when we can’t play up north,” he said. “We flew down (Thursday) to play in the Senior event and will play the Clark County Amateur over the weekend.”

Young added his overall play was as solid as it’s been over two days.

Gary Carpendale put nine birdies on the scorecard over the two days en route to a nine-stroke win in the Silver gross division.

For Carpendale, it was his second straight SNGA major as he also won the recent Las Vegas City Senior Amateur.

“It’s always different,” Carpendale said. “I hit it really good (Thursday) and couldn’t make a putt inside 10 feet. (Friday) I didn’t hit it that well but made everything inside of seven or eight feet.”

He said the key, as usual, was keeping it in play.

“I hit the drier well both days,” he said. “I never got in any trouble. In fact, I hit all 18 greens Thursday.”

He said staying focused in the final round was difficult.

“I had a pretty sizeable lead and played a game within myself,” he said. “I told myself…OK, don’t make any bogeys. And I didn’t have a bogey until I three-putted on the 18th.”

He’s also crossed off another goal on his bucket list.

“This is the first time I’ve won the Clark County Amateur and that was on my hit-list for sure,” he said. “I was disappointed not to win either of the first two majors but was real happy to win the last two.”

Jimmy Bradley got back in the winner’s circle after a 15-year absence, recording two net eagles and 15 net birdies as he won the Silver Net crown by six shots.

“I’ve had a couple of knee replacement that have kept me from playing so it’s certainly nice to finally win again,” he said.

He said his putter made the difference.

“(Thursday) I putted and hit the driver well,” he said. “(Friday) the driver was so-so but the putter kept me in it. The first day I made three or four 20-footers that really got me going.”

He added that while it wasn’t a great putting round in the finale, it had its bright spots.

“I hit some squirrely shots out there into some interesting places,” he said with a laugh. “But I managed to get up and down a lot. I only three-putted once but I had the potential to three-putt three or four other times but managed to two-putt so the putter was there for me.” 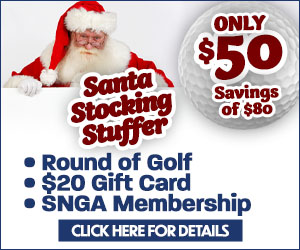 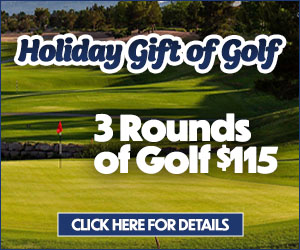